Simon was very proud to be the organist for the live BBC Sunday Worship service that marked the start of Epiphany last week. The service was held at the Holy Name Church, Manchester where Simon is Musical Director and featured the Kantos Chamber Choir with their director Ellie Slorach.

The voluntary performed at the end of the service is Toccata on the Introit of the Feast of the Epiphany, a piece written especially for Simon by Naji Hakim and for which he gave the hugely successful World Premiere on Epiphany in 2017. Click on the link below to hear the service.

Simon has announced the performers for his fifth International Organ Recital Series at the Holy Name Church, Manchester, where he is musical director. The renowned recital series will not only feature concerts given by two highly respected British organists but also two leading organists from New York.

A special recital will also be given by Simon in collaboration with Benedict Holland in preparation for the launch of his new CD, The Embrace of Fire.

After the success of his debut CD, Simon has announced that he will be recording a second CD to be released on the Métier recording label. This CD will feature the compositions of renowned organist and composer Naji Hakim and will be due for release in April 2018.

Simon will be collaborating with distinguished musicians Benedict Holland (violin) and John Turner (recorder) and singer Ranald McCusker will be performing the plain song on which some of the compositions are based.

The CD is to be recorded at the Holy Name Church and will be produced by Richard Scott.

Simon will be performing live on BBC Radio 4 alongside the Kantos Chamber Choir (Director Ellie Slorach) for the BBC Daily Worship Service being broadcast on Epiphany. The service will be held at the Holy Name Church, Manchester where Simon is Musical Director and will feature a performance of Toccata on the Introit of the Feast of the Epiphany by Naji Hakim. Simon gave the World Premiere of this piece at the start of 2017 in a special recital for Epiphany at the Holy Name and this will be the first time the work has been broadcast.

Simon will also be performing Naji Hakim’s new work Toccata on the Introit of the Feast of the Epiphany in his recitals at Westminster Cathedral and the Liverpool Metropolitan Cathedral of Christ the King subsequent to the World Premiere at the Holy Name Church, Manchester on 6th January 2017. 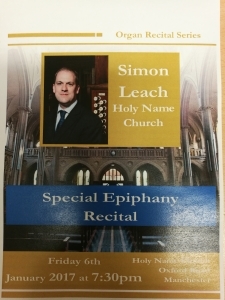 Simon’s next recital will include the world premiere of renowned composer Naji Hakim’s new work Toccata on the Introit of the Feast of the Epiphany. 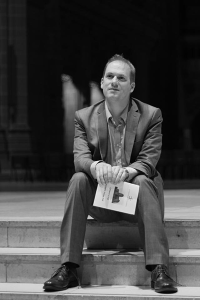 Simon Leach is a prize winning graduate of the Royal Northern College of Music and a former organ scholar at the Liverpool Metropolitan Cathedral. He will be giving several organ concerts in January 2017 with music celebrating the Feast of the Epiphany. The recitals will include pieces by Langlais, Messiaen and Dupré. The highlights of the recitals will be the world premiere of an exciting new composition by Naji Hakim. The prolific Lebanese-born composer is a former organist of the Sacré-Coeur Paris. His Toccata is based on the Epiphany Introit, ‘Ecce advenit dominator Dominus’ and will be premiered on Friday 6th January at the Holy Name Church, Manchester. Simon is the Artistic Director of the international recital series at the Holy Name which houses the fabulous 1871 William Hill instrument. Subsequent performances of the Toccata will be at Westminster, Liverpool Metropolitan and Bangor Cathedrals.

Simon will give the World Premiere of a new work by Naji Hakim. The Toccata on the Epiphany Introit, Ecce, advenit dominator Dominus will receive its premier on Friday 6th January 2017 at 7.30pm at the Holy Name Church, Manchester. He will then perform the piece at Westminster Cathedral on Sunday 8th January and Liverpool Metropolitan Cathedral of Christ the King on Saturday 26th August at 2pm.

Simon is honoured to have been asked to perform an organ recital at Liverpool Metropolitan Cathedral as part of a special series to commemorate its 50th Anniversary. As a former organ scholar of the cathedral, Simon is very much looking forward to returning and taking part in the celebrations.

Simon has now announced the programme for his forthcoming recital at the Holy Name Church. This prestigious recital series is currently in its third season with recitals for the fourth shortly to be announced.

Simon will be performing on Friday 25th November.